The Relationship of the Salaf with the Quran in Ramadan 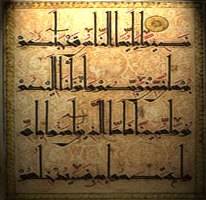 Let us emulate two actions of the Salaf (righteous predecessors) that were the cause of numerous blessings in Ramadan:

a) Reciting the Quran more frequently.

b) Weeping during recitation or when listening to the Quran in submissiveness to Allah.

a) Reciting the Quran more frequently: The month of Ramadan is the month of the Quran. A Muslim should therefore increase his recitation of the Quran during this month. The Salaf used to pay particular attention to the Book of Allah. The angel Jibreel (Gabriel)

used to review the Quran with the Prophet

left studying the Hadeeth and teaching and he concentrated on reciting the Quran. When Ramadan came, Sufyaan Ath-Thawri

left all other acts of worship and concentrated on the Quran.

said, "It was reported from the Prophet

that the Quran may not be completed in less than three days by those who recite it regularly. As for the blessed times such as Ramadan, especially during the nights of seeking Laylat-ul-Qadr or when in holy places such as Makkah for those not inhabiting it, it is recommended that the recitation of the Quran be increased in order to benefit from the blessings of the time and place. This is the opinion of Ahmad, Is-haaq and other prominent scholars. As we indicated earlier, the actions of other scholars also support this view.”

b) Weeping during the recitation of the Quran: It was not reported from the Salaf that they chanted the Quran like poetry without pondering and reflecting on its meanings; rather, they were moved by the words of Allah The Almighty, and they in turn changed the hearts of others with it. ‘Abdullaah ibn Mas‘ood

narrated, "The Messenger of Allah said to me: 'Recite (the Quran) to me.' I said, 'How shall I recite it to you while it was revealed to you?' He said: 'I like to hear it from others.' So I recited the Soorah of An-Nisaa’ till I reached the verse (which means): {How (will it be) then, when We bring from each nation a witness and We bring you (O Muhammad) as a witness against these people?} [Quran 4:41] So the Prophet

(may Allah exalt his mention) said: 'Stop.' I turned to him and found him shedding tears." [Al-Bukhari]

narrated, "When the verse in which Allah The Almighty Says (what means): {Then at this statement do you wonder? And you laugh and do not weep.} [Quran 53:59-60] was revealed, the people of Suffah (poor people who resided in the courtyard of the Prophet's mosque) wept until tears ran down their cheeks. When the Prophet

heard their weeping, he wept with them and his weeping made us weep. The Messenger of Allah

said: "The person who weeps in humility to Allah will not enter Hell." [Al-Bayhaqi]

It was narrated that Ibn ‘Umar

recited the Chapter Al-Mutaffifeen until he reached the verse in which Allah The Almighty Says (what means): {The Day when mankind will stand before the Lord of the worlds?} [Quran 83:6] He wept until he fell to the ground and could not move on to the next verse.

related, "Sufyan Ath-Thawri lead us in the Maghrib prayer, and when he reached the verse in which Allah The Almighty Says (what means): {It is You we worship and You we ask for help.} [Quran 1:5] he wept and this disrupted his recitation. So he started from Alhamdulillah (the first verse of the Chapter) again."

It was narrated that Ibraaheem ibn Al-Ash‘ath

said, "One night, I heard Fudhayl reciting and repeating the verse from the Chapter Muhammad in which Allah The Almighty Says (what means): {And We will surely test you until We make evident those who strive among you [for the cause of Allah] and the patient, and We will test your affairs.} [Quran 47:31] He kept on (repeating) the words of Allah, 'And We will test your affairs', then he would say, 'And You will test our affairs? If You test our affairs, You will disgrace us and expose our secrets. Indeed, if You do that, You will destroy us and punish us,' and he would weep."