Different Types of Women in Ramadan‎‎: Which One Are You? – II 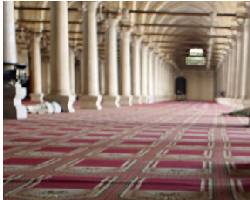 Some women go to the mosque just to spend some time out of their homes or to see some of their friends and acquaintances, not for the sake of praying. Such women might turn the prayer area into a place for private conversations and their voices may be loud enough for the men to hear them.‎

‎Some women do not know the rulings of the congregational prayer and if they come late and miss some Rak‘ahs (units of prayer), they might start praying the part they have missed alone, and then join the Imam. This is not sound, as latecomers should pray with the Imam, then complete what they have missed after the Imam ends the prayer (by saying Salaam).‎

‎Some women, if not most of them, do not straighten their rows or fill in the gaps. They may differ regarding the best row and some of them might pray in the last rows while others would be in the first rows. As a result of this, the middle area of the mosque may be empty and this is because of their different interpretation of the Hadeeth that says:‎ ‎"The best rows for women are the last rows and the worst rows for them are the first rows."‎

‎The sound opinion is what was stated by our scholars, may Allah bless them, that this Hadeeth (narration) applies if there is no separation between men and women. However, if there is such a separation that screens them or they were praying on a separate floor that is not seen by men, then the first rows would be the best ones as they are nearer to the Imam, and the Qiblah (direction of prayer) – Allah knows best.‎

‎Some women do not leave the mosque immediately after the prayer ends and wait until men leave, so they intermix with men. Women should leave the mosque as soon as the Imam performs Tasleem, while men should wait for a while until the women leave.‎

‎Some girls, who are about to reach the age of puberty, may undergo menstruation for the first time and they conceal the matter and complete their fast even while they are menstruating to avoid telling their parents. This is despite the fact that the fasting of the menstruating women is invalid, and they do not make up for the days that they fasted while having menstruation out of either ignorance or bashfulness. It is the duty of mothers to be alert to this. Besides, any girl who does so should make up for such days no matter how numerous they were. If she did not know the exact number, she should do her best and estimate the number of days.‎

Some other girls go with their families to Makkah and assume the state of Ihraam (sacral state), then they menstruate for the first time and they do not tell their parents out of bashfulness or fear. After this, these girls enter Al-Masjid Al-Haraam, pray with the people and even perform Tawaaf (circumambulation) while they are menstruating. By so doing, they make a grave mistake and their ‘Umrah (minor pilgrimage) will be invalid. They have to perform Ghusl (ritual bath) and perform Tawaaf after being purified. They must repent to Allah The Almighty and ask Him for forgiveness.

said, ‎"Men on camels used to pass by us while we were with the Messenger of Allah

and in the state of Ihraam. We would cover our faces with our gowns when they passed by us, and then, uncover them again."

‎ as women of this age show their eyes or some of their face and some of them even beautify their eyes. Weakness of faith, lack of religious deterrence and the fact that they go out frequently and look everywhere, led our scholars to prohibit wearing this kind of Niqaab in order to eliminate all the means that lead to Fitnah (trial), so why do some women insist on wearing this kind of Niqaab?

Some women spend the nights of Ramadan, especially the last ten days, in shopping, and they go to the markets and other places that increase their heedlessness. They might even go out without a Mahram (non-marriageable male) or while exposing their beauty, so they return home with many sins instead of using these honorable nights in matters that bring them nearer to Allah The Almighty. Indeed, the deprived person is the one who is deprived of the goodness of these days.

Moreover, one of the ways of performing good deeds is to serve the people who are fasting. It was narrated that the Prophet

said: "Those who give food to fasting people to break their fast today received the reward."  Women should seek the reward of Allah The Almighty for the deeds that they used to do before having menstruation. The Prophet

said: “When a person falls ill or travels, the same reward will be written for him as the one he receives for performing good deeds when he was a resident and in good health.”

Different Types of Women in Ramadan‎‎: Which One Are You? – I