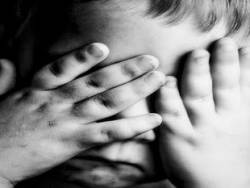 Dr. Ahmad and his family returned home after a long party in the house of a family friend on the occasion of the children's success.

Exhausted, the parents entered their room to sleep.

Not wanting to sleep, both Hasan and Husayn, young twins, sat in their room and played and laughed in a disturbingly loud voice which annoyed their parents.

The mother got up quickly and opened the door of the children's room so suddenly that the children were scared and their eyes widened in fear. They (addressing their mother) said, "Aren't you asleep?" She said, "We could not sleep because of the loud noise you are making. Have you never heard about the Skinned-Leg Monster that eats the children who don't sleep after twelve o'clock? Sleep! Sleep quickly!" The mother went out after she had closed the door and switched off the light and returned to her room to resume her happy dreams, while both Hasan and Husayn wrapped themselves in their quilt, with each of them imagining in the darkness the fictitious Skinned-Leg Monster.

Dr. Ahmad's family went on Friday to the children's park so that the children would enjoy themselves and play football in their summer holiday.

Both Hasan and Husayn went to play away from the sight of their parents, who sat and started to talk. All of a sudden, Hasan and Husayn returned hurriedly towards their parents, crying and weeping. The mother ran towards them anxiously in quick steps and stretched her arms towards them and said, "What happened? Why are you weeping?" Both children pointed to a young child who was standing away, and he had their ball. The mother said to them kindly, "Did he hit you? Has he taken the ball from you? He seems stronger (than you)."

The mother took hold of her children’s hands and went to the young child who was careless about the weeping of Hasan and Husayn. The mother said to him, "Why did you take the ball from them? Is it because you are stronger than them and they are still young?"

The child threw the ball and went away to resume his play, without even caring to apologize to them.

When Hasan and Husayn turned ten years of age, they liked to take skiing lessons, just like their fellows of the same age. However, their father was afraid they would be hurt, and said to them, "No, my children. This is a risky sport. Do you remember the injury I had when I tried to learn skiing? My knee was wounded and I spent a long time using a crutch, after nearly a week in hospital. I think you should rather wait until you have grown stronger and are at least twenty years old."

Hasan and Husayn's mother went to the mosque to attend a religious lecture, which was about the courage of the children of the Companions. She was attracted by that title, and went to listen. The female teacher started to talk about bravery and relate examples of the courage of the brave children of the Companions, may Allah be pleased with them. She said, "During the Battle of Uhud, a mother gave the sword to her child, and he was not strong enough to carry it. She straightened it on his forearm with a braided strap and brought him to the Prophet

and said, "O Messenger of Allah! This is my son to fight on your behalf." He was injured and fell down. He was brought to the Prophet

who said to him: "O son! Perhaps you were scared!" The child said, "No, Messenger of Allah."

The mother of Hasan and Husayn was paying attention to the teacher who went on relating further examples.

It was narrated on the authority of Sa‘d ibn Abi Waqqaas, may Allah be pleased with him, that he said,

(to choose who would take part in the battle), thereupon I asked him, 'What is the matter with you my brother?' He said, 'I fear that the Messenger of Allah

would see me and return me because I am young, and I want to take part in the battle, perhaps Allah The Almighty would endow me with martyrdom.' He then was shown to the Messenger of Allah

who returned him because he was young. He went on weeping so much that the Messenger of Allah

permitted him (to take part in the battle)."

The mother of Hasan and Husayn was increasingly surprised when she listened to the story of the two children who killed Abu Jahl (in the Battle of Badr). It was narrated on the authority of ‘Abdul-Rahmaan ibn ‘Awf, may Allah be pleased with him, that he said,

“While I was standing in the row on the Day (of the Battle) of Badr, I looked to my right and my left and saw two young Ansaari boys. One of them called my attention saying, ‘O uncle! Do you know Abu Jahl?’ I said, ‘Yes. What do you want from him, O nephew?’ He said, ‘I was informed that he abuses the Messenger of Allah

. By Him in whose hand my life is, if I should see him, then my body will not leave his body till either of us meets his fate.’ I was astonished at that talk. Then the other boy called my attention saying the same as the other. After a while I saw Abu Jahl walking among the people. I said (to the boys), ‘Look! This is the man you asked me about.’ So, both of them attacked him with their swords and struck him until he died and then they returned to the Messenger of Allah

to inform him about that. The Messenger of Allah

asked:‘Which of you killed him?’Both of them said, ‘I killed him.’ The Messenger of Allah

asked: ‘Have you cleaned your swords?’ They said, ‘No.’ He then looked at their swords and said: ‘No doubt, you both killed him.’" The two boys were Mu‘aath ibn ‘Afraa’ and Mu‘aath ibn ‘Amr ibn Al-Jamooh, may Allah be pleased with them.