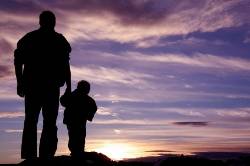 To develop the proper conduct of the child, you should teach him the duties that he has to do, and this takes place by being a role model and by sound upbringing and guidance.

The child will not learn to be truthful except from a truthful educator.

The child will not learn honesty except from an honest educator, and so on.

Moral upbringing is the spirit of the Islamic upbringing, which does not mean neglecting other aspects. It is necessary to care for all matters related to the child, since he needs physical, mental, spiritual and academic strength. Therefore, we find that the spiritual and worship-related side is inseparable from the moral side.

Morality in the Sunnah (tradition) of the Prophet

did not leave any aspect of human life but has drawn the ideal methodology for the sublime attitude in harmony, integration and structure. The Prophet, sallallaahu ‘alayhsallam, was the peak of morality, and the best way to noble morals is the way of the Messenger of Allah

whom Allah The Almighty Addressed Saying (what means): {And indeed, you are of a great moral character.} [Quran 68:4]

Stages of the child's moral development:

Man's moral development begins from the early stages of his life and will continue until the age of maturity, which is the basis of religious assignment and bearing responsibility. Man is born with a natural inclination to goodness, and the environment plays its effective role in shaping this natural inclination according to its readiness and inherited capabilities. Righteous upbringing helps it grow soundly and form perfectly, whereas corrupt upbringing erases the features of goodness in it and makes it tend to corruption and evil.

It was narrated on the authority of Abu Hurayrah, may Allah be pleased with him, that the Prophet

said: "Every human being is born with a sound innate inclination to the truth (i.e. Islam), yet it is his parents who convert him to Judaism, Christianity or Magianism." [Al-Bukhari and Muslim]

The first stage of moral development:

The process of moral development begins in the first stage of man's life during his early childhood, and at this stage the child's instincts, needs and inclinations control him. These things need to be satisfied to help him lead a stable and happy life, and any deficiency in them, or severe and harsh treatment may lead to disorders in the child's psychological, mental, emotional and physical health. Parents at this stage should not give the child any moral responsibility for his actions, attitudes, patterns of behavior, emotions and reactions, because he is incapable of distinguishing, understanding and making sound judgments. They should treat him with mercy, kindness, gentleness and tolerance.

This is what our noble Prophet

instructed us to do. He did not give children any responsibility for their wrong actions and inappropriate behavior according to the moral judgments of adults. Rather, he treated them with mercy, kindness and compassion, taking into account their powerless childhood, while being aware that they are not responsible for their actions and behavior because they have not yet attained the age of distinction and discernment. Abu Qataadah, may Allah be pleased with him, said, "The Prophet

came out while Umaamah bint Abu Al-‘Aas was on his shoulder. Whenever he bowed, he would put her down, and when he stood, he would lift her." [Al-Bukhari] This Hadeeth (narration) shows the mercy of the Prophet

his gentleness with his granddaughter and not holding her accountable for what she was unaware of, i.e., riding on his shoulders during prayer, which is the most sacred act of worship.

The second stage of moral development:

In the second stage of man's life, i.e. the stage of middle and late childhood, the child's social relationships and contact with others in the neighborhood, school and social relationships expand. He needs to adapt well to the situations and new attitudes in his life, and he begins to distinguish between the acts and behavior that others approve or disapprove of. The child's happiness is associated with the satisfaction of others with him, and his pain and misery are associated with their anger at him. This constitutes the correct start of forming good conduct.

This positive moral development motivates the child to permanently create a balance between his wishes and the desires of others, and between his trends and religious and moral values; social customs, habits and traditions; and rules and laws. In that way, the features of the child's moral responsibility emerge until they culminate in the third stage of moral development as his mental and emotional maturity is complete. At this stage, we should care for the child's natural tendency to imitate, emulate and follow others because it is one of the most important foundations of the moral upbringing, the acquisition of values and virtues and the development of inclination to goodness.

The purified Sunnah of the Prophet

highlighted this aspect and stressed the necessity for it to be considered wisely by parents, people assuming the upbringing process and all those responsible for the education and upbringing of youngsters. It urged them to be ideal role models in proper conduct, noble behavior, self-restraint, self-esteem and adopting good qualities and virtues.

The third stage of moral development:

At this stage, which is the stage of puberty and adolescence, moral development begins to take root and be firm. It culminates as mental, psychological and social maturity is completed. After that, man is able to control his inclinations and motives, and subject himself to the sublime ideals that he instilled and implanted within himself and made it a criterion for his moral and behavioral actions. He committed himself to them, regardless of the presence of an external authority represented in the laws, regimes, customs, habits, and traditions as well as the presence of social control.