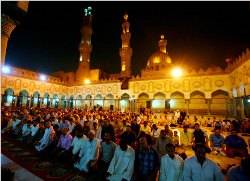 With the approach of the noble and blessed month of Ramadan, we thank Allah The Exalted for keeping us alive to witness it. We beseech Him to render us among those who fast its days and pray during its nights out of faith and hope for the reward of Allah The Exalted.

Allah The Exalted has honored the Imaam of the mosque, and placed him in a superior status, as he leads the Muslims in prayers. He shoulders the responsibility of delivering the message of the mosque, i.e., the great message of Muhammad

. He is the focus of attention of all the people in the community, and the role-model of the callers to Allah, who aspire to become beacons of guidance that usher people to the Straight Path.

The Imaam should be reminded about devoting his efforts sincerely to the sake of Allah The Almighty and of being mindful of Him at all times and in everything he does. He should also be reminded of his great responsibility and urged to fulfil his duty properly. He should efforts, great or small, for Allah The Exalted in devotion and sincerity, hoping for His rewards. Indeed, Allah The Exalted does not waste the rewards of the deeds of the righteous people. Certainly, Allah The Almighty does not waste the reward of the doers of good.

These are some suggestions for the Ramadan program in the mosque and we hope that you would put them, or as many of them as possible, into practice in this blessed month. During the month of Ramadan, people are more inclined to doing good deeds and more eager to come closer to Allah The Exalted. The suggestions touch upon those who hardly attend the prayer in congregation at the mosque on regular days. We implore Allah The Exalted to guide you to the Straight Path and grant you steadfastness.

Here are some proposed programs for the month of Ramadan:

1.  Preparing people for receiving the month of Ramadan before its advent with an appropriate period of time. This can be achieved through delivering speeches and organizing religious knowledge classes about this issue.

2.  Getting acquainted with those who do not attend the prayers at the mosque before the month of Ramadan. The mosque community should spare no effort to get to know them better and foster rapport through offering gifts, visits or the like.

3.  Organizing a religious class at the mosque for the memorization of the noble Quran for children and adults alike, taking into account the appropriate times for these classes. Special programs should be set for the distinguished attendees and they should be rewarded and honored for their diligence. For example, they may be awarded with a trip to perform ‘Umrah (minor pilgrimage). Scientific and cultural programs should also be organized. A ceremony may be held in order to gather all the attendees in the nearby mosques to which one of the famous scholars and seekers of knowledge may be invited. Parents should be urged to inculcate in their children the urge to attend memorization classes and the useful public activities that are organized near their mosque.

4.  Allocating a donation box to collect funds in order to finance the mosque’s activities. For instance, these activities may be monthly contests, competitions for children, for Muslim families and for women, or other projects and activities that may be carried out by the mosque community.

6.  Addressing the negative phenomena in the Muslim community such as: the deviation in women's adherence to Hijab, dealing in usury, not attending the congregational prayers, and the like. This could be accomplished through speeches, lectures, audio materials, booklets and posters addressing these phenomena.

7.  Assigning greater care and attention to the youth and employing them in carrying out some programs at the mosque and getting them used to doing good deeds.

8.  Distributing religious booklets every week, preferably at the times when there are numerous attendees in the mosque.

9.  Allocating a box in the mosque for the attendees, males and females, to submit their questions and answering them at a specific time each week.

11.  Giving the residents of the neighborhood a Ramadan gift from the mosque. The gift could be a booklet, audio materials and some educational handouts.

12.  Holding a competition for young people to memorize some Soorahs of the Noble Quran, as well as memorizing some Hadeeths or beneficial stories and the like. The winners of the contest may be honored and awarded before their parents and the mosque community.

13.  Organizing a competition for women via distributing some questions handouts among the female attendees and collecting their answers in a special box in the women's section of the mosque. It would be better if the prizes were not only religious audio materials and booklets. Other useful items for women can be given to the winners.
To be continued …
A Message for the Imaam of the Mosque regarding Activities in Ramadan-II