The garments of Taqwa: What are you afraid of? 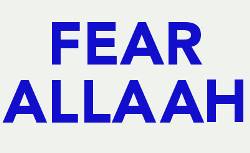 There is a famous story about an emperor. This emperor was cruel and unjust to his people, so a tailor decided to play a trick on him. He went to the king and offered to make for him the finest clothes ever.

But instead of making a suit for him, he just pretended to make a suit, and fooled the emperor into thinking that he was working hard by taking a long time.

Eventually after a long period of waiting, he gave the emperor a handful of air and told him that it is the best set of clothes ever made. In fact, the tailor told him that the clothes are so fine to the point that the wearer doesn't even feel that he is wearing them. Blinded by his own arrogance and not wanting to appear dumb in the eyes of the tailor, the emperor immediately showed happiness with the ‘new suit’ and ordered a parade to take place in the town so that he could show his subjects his new appearance. Of course, everyone was too scared to tell this tyrant that he was actually naked. Instead, they salute and flatter him—all except for one boy. He was too young to know of social convention or to have fear of tyranny, thus he pointed out to the truth and said what others could not dare to express. Amazingly, this act, at least for that moment, made the fear change its place. Fear so overwhelmed the emperor he became astonished, dumb founded. His surprised subjects, on the other hand, easily slid out of their worries, ridiculed him and laughed so hard at what he gotten himself into.

While this emperor seemed to have been blinded by his own arrogance, the reality showed us that he was, in fact, blinded by his own fears; and his people, whose opinions he feared, were also held back by their own fears—reality showed his arrogance not to be a sign of strength, but one of weakness. This situation represents a community paralyzed out of weakness and fear, all because of an attitude that had gotten used to the status quo.

This very old story is of particular significance to the time we live in. We live in a time when there are so many pressures to conform to the images in the media and the lifestyles of our non-Muslim peers.

Sometimes we are startled to find that we have even started to imitate the same type of foul language and habits in our own free time. Maybe we used to worry about being around alcohol when our colleagues enjoyed it, but have become used to their customs. Maybe we wear tight or revealing clothes (both men and women) because not doing so would make one unfashionable. Maybe we find ourselves scared to make a change in society, against the expectations of the community or even the world around us. All this comes from a type of fear. A fear to seek truth even when falsehood prevails and even when it might lead to difficult answers. I am talking about a fear which prevents us from asking questions about why people's attitudes are the way they are, and makes some people desperately feel like we are living in isolation, even though we have more gadgets that connect us than ever before. I am talking about a fear to emulate the great scholars and scientists of Islam's past. These men were pioneers in the worldly and the intellectual planes—men who loved knowledge for the service of God. I think we are afraid to strive like them. And there is no reason to be afraid.

Fear comes from human vulnerability. If I were to place a Quranic moment, where human vulnerability is first mentioned, it would be in Chapter 7 verse 20. In this verse, Satan affects Aadam and Eve with a psychological trick, which makes them feel a need to cover their bodies with clothes; whereas they had felt no such need before, and Allah had not told them to make clothes for themselves. What happened?

Satan had pledged to attack them (and eventually their progeny), Allah Says on the tongue of the devil (what means): {Then I will come to them from before them and from behind them and on their right and on their left, and You will not find most of them grateful [to You].} [Quran 7:17]—from every angle of observation, in order to find out what makes us tick and learn how to push our buttons. Satan became familiar with human weakness and bodily imperfection, and manifested it to Aadam and Eve. So when we came to this earth, we came in a state of vulnerability, fully aware of our more carnal desires. This is one of the bases of our being tested.

And what did Allah do then? Allah promised us when we came to earth of the knowledge of how to make clothing and beautiful adornments, but He Almighty told us that: {But the clothing of righteousness — that is best.} [Quran 7:26] The use of normal clothes by human beings serves to cover their nakedness and vulnerability to others. But what is the clothing of righteousness with respect to our relationship to God?

Righteousness is the means by which we surpass that fear of others’ physical nakedness; it is similar to the ‘nakedness’ we feel when we are in danger of being seen. Righteousness, therefore, brings us from Dunya-consciousness to God-consciousness. Righteousness is about caring for and embracing the ever-seeing and ever-nurturing vision of God. But in another dimension, righteousness is a kind of fear itself... because Allah made us into creatures who become happy, sad, and fearful, so righteousness, in this sense, is a means and an end, of and for, the human faculty of fear. Our fear should not be wasted solely on roller-coasters, scary movies, or other people's opinions and actions. Our faculty of fear is for Ibadah (worship), which will transform our fear into something much higher and more suited towards our lofty purpose—the Amanah (trust) that God has placed on the human being.

Allah mentioned this when Satan tried to deceive us (our parents, actually) and lead us (them) astray. Also, it is helpless to try to defeat him on our own; Allah Says (what means): {Indeed, he sees you, he and his tribe, from where you do not see them.} [Quran 7:27] So we come under psychological attack that will play on all of our subconscious desires and potentials (this is a huge realm of modern psychology—the study of the subconscious). Consider what goes on today all around us. We are bombarded by millions of messages that tell us to manifest our hidden desires through infinite means, which vary from "scandalously sexy" people to "sinfully indulgent" chocolate. The sad thing, however, is that people, since the time of Freud, have succumbed to this on a widely popular scale. A quick look at how people appreciate their existence and what they think of the purpose of life reveals the reality that many do not admit the need to religion or accept its existence because, to them, people are animals who seek out wealth, power and sexual gratification. It is true that a good portion of this may he attributed to the fact that people have rejected God and His message, but a larger portion is definitely due to their denial of the Garments of Taqwa (righteousness)—thus all they are left with is human nakedness and human imperfection.

Allah tells us that the devil has such deep psychological insight into us, and he is always trying to deceive us all the time, and that, indeed, is the constant companion to those who choose to let themselves be led away from Allah: Allah Says (what means): {Indeed, We have made the devils allies to those who do not believe.} [Quran 7:27] When we carelessly (or aimlessly) walk around in a culture which does not see and seek the Garments of Taqwa and which does not shield itself from its own desires and weaknesses, we are in fact setting ourselves up for failure because we are, as such, walking targets and easy prey for the devil. Immersing ourselves in this sort of environment and literally trying to make it on our own, while surrounded by material delights, materialistic visions and diminishing spiritual perceptions, we are actually facing the danger of deceiving ourselves into disbelief in the Unseen. We have to be careful because thinking that certain improper behavior can benefit us and knowingly seeking the company of those whose hearts are dead, are sure signs which indicate that we may have already crossed the limit. Those who are at that point, are in fact living in fear of this Dunya (worldly life). Simply, they are busy trying to stitch useless fig leaves together for themselves, but are settling on second best—they have lost the Garments of Righteousness.

If we soul-search and look into what it is that we fear the most, we will find a similar collection of items: money, job, public opinion, etc. There is nothing wrong with any of these things as long as we establish a hierarchy with Taqwa of Allah at the top and as a guiding light. Even if we do not really understand this at the moment, or at any moment, it is of vital importance to clearly recognize—intellectually and—practically this hierarchy. When we do, we will see a real result in our attitudes. If we do it often, it could become a reoccurring remembrance of Allah, which in turn, becomes a chance for us to put Allah before harmful action—because this hierarchy will come to mind. If we repeat it often, we will find it easier to realize our weaknesses as human beings, to believe in ourselves and in our noble human dignity. Doing it often will guarantee a covering shield and a protection, which Allah has designated for the believers and desired for them to seek from Him and have it.

Eventually, this will turn into a solid character that will help us increase our Taqwa, which once we do, will help us naturally recognize, read and maintain Allah's boundaries. Thus secure peace and happiness. Not only in this world, but also, and more importantly, when we reach the life-to-come. There, we will find that our Garments of Taqwa in this earth have become for us, in Jannah (Paradise), the basis of the fine silk, gold and pearls of everlasting eternity which Allah, the Most Mighty and Magnificent, will swathe us in.
It was only the innocent child who pointed out to the tyrant emperor's folly because of his connection to his Fitrah outside of the realm of human convention, which the Prophet

had told us that it distorts our true selves. Let us step down from our thrones of heedlessness and delusion, embrace this purity, the Fitrah, which God has put within us, and cherish it until we die and rise up again.