How a Minister in Trinidad and Tobago entered Islam 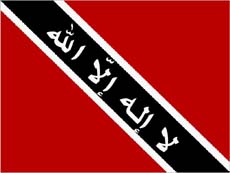 She said: "I totally deny the idea that I accepted Islam in 1975 by renouncing Christianity. Really I am quite unable to understand and explain what the matter was with me. Let me take you back to the 9th March, 1950, the day that was fixed for me to enter Christian Monastery. When I woke up in the morning of that day, I felt that the voice -Allahu-Akbar Allahu-Akbar (Allah is the Greatest) was ringing in my ears and it was thrilling my entire inner self. Lo! I had come back to Islam.

'I did not quite know what it was, but the monastery I refused to enter. After that I passed many years, seeking Allah's guidance, until at last I was able to come across a copy of the translation of the Holy Quran. Then I readily put faith in it. I happened to meet a Muslim scholar, Maulana Siddiq from Pakistan and an Indian scholar Shaykh Ansari. I had detailed talks with them about nature and what I felt about it in my heart, so much so that these great scholars exclaimed to me: Thank Allah you are a Muslim! You are now a Muslim lady. Read what you like, enter the Mosques and pray. We are prepared to welcome you, whenever you feel disposed to learn anything."'
Iman (Faith) is Bliss
"I felt happy. Ever since that day I have been feeling that my heart is overflowing with the bliss of Iman (Faith) and with love and high esteem for the Holy Prophet Muhammad [Sallallahu Alaihi Wa Sallam / peace be upon him] Although the date of my formally embracing Islam is sometime in the year 1975, I have been a Muslim for the last 33 years, ever since the day I heard the great mysterious voice and I refused to enter the monastery. My heart proclaimed: Allahu Akbar: God is the Greatest).
"I was the first coloured girl to enter the Mosque. This encouraged many Muslim girls to enter Mosques for prayer, particularly the Mosque of the Anjuman Jami' Sanatal which was founded by the great scholar Dr. Shaikh Ansari in the city of Francis in Trinidad. Its present Chairman is Al-Hajj Shafiq Muhammad.
"Prior to this, the residents over there thought that Islam was the religion of the Indians who followed so many shades of religious tenets and paths. They thought Qadianism and Ahmadism being more important.
"Later on a large number of the islanders, mostly of African origin, embraced Islam, until the ratio of the Muslims rose to 13 percent of the total population of the Republic, as against 31 percent Catholics, 27 percent Protestants, 6 percent Hindus, and 23 percent others."
Effect on her Duties
About the effect of her embracing Islam on her work in a state where Muslims are not in the majority, she said: "Islam demands of us efficient and sincere application to duty and I practise the teachings of the Faith (Islam) with sincerity. I do not tell lies either in my (official) work or in my (personal) life. To the best of my ability and with strong consciousness of my heart I shun everything that is repugnant to Islam. As regard the impact of my conversion upon my work, it was nothing but all blessing and good. Our former Prime Minister advised me to visit Egypt, because it is the land of the renowned Jami'ah Al-Azhar and the source of civilisation. He used to talk a great deal about Islam.
"When I requested my present Prime Minister to give me permission to visit Egypt in connection with my assignment as Minister of State for Social Development and Local Government, he agreed and also advised me to visit Al-Azhar and the Supreme Council of Islamic Affairs about whose activities we heard so much during our visits to the U.S.A. and the U.K.
"I took part in the parliamentary elections many a time and came out successful in spite of being a Muslim. I have worked as Minister for Education and Culture and also as a Minister in the Prime Minister's Cabinet, although I am a Muslim.
"I would like to tell something important. The Republic of Trinidad and Tobago allows official holidays on the occasions of Eid-ul-Fitr and Eid-ul-Adha festivals. The Muslims have freedom to celebrate the month of Ramadan in their houses as well as in the Mosques throughout the State."
She further said: "I make an appeal to the Islamic World to close their ranks because unity is strength, particularly under cover of the excellent religion of Islam which has brought equality to mankind and which regulates our relations and dealings. It is, therefore, imperative that the Islamic World should halt the wars raging among its certain states. It is possible to resolve all difficulties and disputes with mutual negotiations, consultation and understanding.
"Almighty Allah has guided me to Islam and I pray Him to guide the Muslims towards fraternity and peace so that they may in reality become in this present age the best community that has been raised up for mankind."