From a bathing suit to hijab 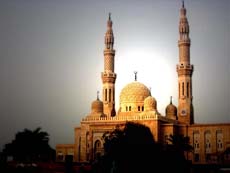 Somayyah was educated in a convent and as a teenager worked as a model and in cocktail lounges. Growing up in Ireland and Britain, she tried drugs and liquor and supported alcoholic and sometimes abusive parents.

Years later the 25-year old Irish woman moved to the Gulf Arab Emirate of Dubai where, through books loaned by friends, she learned about Islam.
“I would go to the beach in my bathing suit and listen to music on my walkman,” she said.
“One day I was going to the beach in a taxi driven by a Pakistani who had Quran on the radio. I got there and put one foot on the ground to get out.
“Then I looked at the taxi driver and said: ‘No, take me back home.’ I couldn’t go to the beach and take my clothes off.”
Now Somayyah, a school teacher who adopted the name of Islam’s first female martyr, will not leave her flat without covering herself from head to toe in Hijab. Since she reverted her family has refused to see her.
In interviews, some said they reverted because they were disillusioned by changes in their own religious traditions.
Others said they were influenced by husbands or relatives or that they liked the sense of community.
“I had seen so many changes in the church that unsettled me,” said Kathy Grigg, an American in her mid-thirties whose family supported her reversion to Islam.
“Latin was dropped from the mass, women were not only no longer required to cover their heads in church but were permitted to wear pantsuits. Abstinence from eating meat on Fridays was dropped.”
“There was no more reverence. But to me, seeing a Muslim pray, to bow down on the ground…”
Dr. Bilal Philips, 49, a Canadian who had worked for the Saudi air force religious affairs department in Riyadh and who was well-known as a TV religious presenter, said he belonged to the communist movement in Canada and the United States.
“I became fed up. Basically I was searching for something meaningful,” he said of his reversion 24 years ago.
Some US military personnel were exposed to Islam when they served in the Gulf war.
Philips manned an Islamic information center in a tent at an air force base in Dhahran, Saudi Arabia. In the six months after the Gulf war 3,000 Westerners reverts at the center, 98 percent of them women, or US servicemen he said.
They gave up alcohol but wearing Muslim attire and praying five times a day clashed with military duties.
“You got out of uniform as quickly as you could and put Hijab back on,” said one revert, Asma Markusson, a former US army reservist who grew up in Illinois wanting to be a nun.
As for prayers “I had to catch my prayers when I could.”
An organization called Muslim members of the military has now been set up in Washington to tackle such issues as prayer timings and wearing the Hijab.
Markusson said that when she arrived in Saudi Arabia in 1990 she had “strange ideas” about Muslims.
“There was this chop-chop business,” she said, referring to amputations as Islamic punishment for crimes.
“And then what about all this harem stuff?” She now lives in Bahrain, one of two wives of a Saudi man.
Markusson gave up figure skating after she reverted. Others stopped wearing cosmetics and bathing suits.
Jumana Sharpe, British woman who is the second wife of a UAE national, lost her business.
“Putting on Hijab has been difficult for me. I had my own beauty salon and it did cause a stir with my mostly Western clients,” she said.
Westerners who reverted say the hardest part is not the change in lifestyle but alienation from family and friends or discrimination when they return home wearing hijab.
Some women say they have had objects thrown at them. Jan Lifke said her passport was held at a US airport because officials couldn’t believe she was an American!!
“My mother told me I was going to hell when I told her I reverted,” Markusson said.