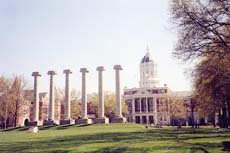 Hajar is the new name of Yamilia. She is a twenty-eight. A student of social studies at the University of Missouri, Columbia, she started studying Islam before two years to find out the truth which she had missed in the material life of the States. Yamilia got convinced and embraced Islam and changed her name to Hajar (The name of Abraham’s wife, mother of Ishmael). She likes this name because it is the name of the mother of Ishmael (greatest grandfather of Muhammad

Hajar said that for many years she was thinking of the universe, existence, life and death. The research in these matters made her suffer a lot as she could not find convincing answers. The American materialistic culture could not solve these basic issues. She used to hear about Islam, but her view of it was distorted because she heard that Islam discriminates women and that it is a religion of atrocity and force. She knew nothing else about Islam till then. Hajar tells her story:
“I started to study Islam and soon discovered its purity and defiance of the materialistic power. I carried on more studies and my studies were very hard in the beginning, as there are not enough honest books on Islam yet in the English language. I loved Islam, as it is a religion of equity, justice, individual freedom and so on. Islam gives the individual freedom and a role of life as Well as responsibility for his actions. I started to understand more and more about Islam and as a result embraced Islam.”
HAJAR PROPAGATES ISLAM:
When she embraced Islam, she felt her religious responsibility toward Allah and Islam. She started to call people to the truth she reached. She felt a strong desire to show the Americans the results of her research because they lacked the true knowledge about Islam due to distortions of Islam in the West intentionally done by its enemies and malicious orientalists.
Hajar responded to Islam and she was changed wholly from a careless American young lady into a responsible, modest one whose behavior and life is controlled by some Divine doctrines. She said: “ My noble aim is to fight in the cause of Islam against capitalism, tyranny and vices which reign the world now. Islam is the only solution for all these sufferings as well as starvation, war etc.”
She was asked why Islam is the only solution and she said: “ Islam is the only true religion that offers solutions, systems and principles for the social, political and economic problems of the world. Islam is a way of life that suits the dichotomous nature of man, the soul and body alike, as it is Allah’s Message demonstrated by the Messenger,

who lived it, practiced it and died just as anybody would die.” She added: “I found in Islam a solution for the philosophical issues which gave me really a hard time of research and reading.” She spoke truthfully and expressively as one would feel. She pronounced some Arabic expressions. She explained that Islam is not merely worship, but it is a coherent system of walks of life. Jihad for equity, justice and fairness is the most important feature of Islam and the most needed one at this time.
Hajar adopted Islamic Hijab since her conversion and her life style was adapted to the doctrines of Islam. She started to perform the obligatory prayers timely. She learnt some of the Quran by heart for prayers. She said that she liked problems for the sake of her religion. Many Muslims were tortured, but they never yielded. This is why she was prepared to tolerate the difficulties of reversion to Islam. She said she would care for nothing but Islam.
She believes that Palestine is a Muslim and Arab land which should legally be given to the Palestinians. She sometimes speaks on this issue to assert the Islamic claim on Palestine.
It is really strange to see such an American lady defending Muslim rights and propagating Islam in the States.
Muslims everywhere, especially the Arabs, should learn from Hajar a lot and assert their rights because it was they who kept the light on for the West and humanity. Hence they need not feel desperate as regards the Arab and Islamic land of Palestine, encroached upon by the Jews and their allies.