Sufyaan Gent: It was as if 'the scales fell from my eyes' 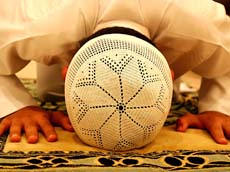 Sufyaan Gent was born Maurice Alexander Gent. Prior to embracing Islam, he tried various Christian sects, but nothing ever seemed quite right.

Whilst working as a civil servant in London, he met a Muslim lady who later became his wife. She had been brought up as a Muslim, but was not practicing her religion. Nevertheless, she had enough faith to insist that her future husband embraced Islam before marrying him. After living several years as a notional Muslim, not having the slightest idea about praying, fasting or about the Prophet Muhammad, sallallaahu alayhi wa salam, he attended a Muslim study circle with an idea of getting an academic knowledge of Islam to impart to his son.
On listening to the obvious, plain and simple truth of Islamic teachings, he became fascinated with this great religion. He started to practice it and from there took it to his wife. Their life was transformed from weak belief to a life dedicated to worshipping God alone.
Sufyaan has organized several weekend conferences and Islamic exhibitions and is currently involved with the Islamic Society of Britain.
“Before I became aware of Islam I had a strong belief in God, but I could not find an exact expression of that belief in any of the churches I attended. There always seemed to me to be a hypocrisy about churchgoers, a sanctimonious ‘holier than thou’ attitude which contradicted the kind loving nature that I saw in Jesus. I could never understand why you needed to go through Jesus or a priest or vicar to get to God. It seemed like taking insurance through a broker, providing work for someone but not getting anything extra in return.
“I tried to live as I felt a Christian should live, caring for my family, working hard, trying to be honest, and not interfering with others. Then, in 1977, I met my future wife, who was a student in London, where I lived at that time.
“She explained to me the Islamic belief that there is none worthy of worship but Allah and that all Prophets were simply telling the same simple truth, that there was only one God and that mankind was born to worship Him. She explained that there was no difference between working and praying, as everything was an act of worship to be carried out according to God’s will.
Consequently, I gladly accepted Islam in 1977 and we were married. However, my lifestyle did not change, I just went on living as I had before the Shahadah ( the testimony that there is no god but Allah and that Muhammad

is His Messenger), and this state of affairs continued until 1987. It was then that I started reading about Islam with a view to trying to teach my son about his religion before he started school. He was about three years old at that time.
When I began to read I realized how I had not been fulfilling my obligations to my creator. I thought that by declaring “There is none worthy of worship but Allah” I had done enough. Very soon I started to realize that I had to pray, fast, pay Zakat, go on pilgrimage when I could afford it, and become part of the Muslim community.
So, Alhamdulilaah, (“thanks to God”), I started to do these things. It was, as stated in the Glorious Quran, as if the “Scales were lifted from my eyes.” Now, I long for the time for prayer, I love the month of Ramadan, I gladly pay Zakat, and I performed Hajj in 1992, all thanks to God.
It is difficult not to get bloated with your own importance as a new Muslim. You get used to being given special treatment by your Muslim brothers, and this is something we should try and avoid, as there is no difference between the believers. The devil will try to exploit human weakness and make you think you are special, and so we must pray to avoid this trap.
I look forward to the time when the Muslims take the message of Islam to the non-Muslims here. We must lead by example, as we are the best of nations so we must behave as such.
Through honesty, truthfulness, polite behavior and caring for all humanity is how Islam spread in the beginning. We must get out of a ghetto mentality and we must also avoid the other extreme of becoming so anglicized that we lose Islam altogether.
Islamic teachings show us that everything is in balance; we must make our presence felt by helping to provide a moral lead to society, but at the same time keep an Islamic identity as opposed to a nationalistic one.
Now, as a Muslim, I cannot understand the attractions of pubs, discos, nightclubs, expensive holidays and so on. If you are amongst a community of believers you derive your pleasure from sitting with them, discussing the wonders of our Creator, or by enjoying with your family and doing things together, living in a closely knit environment of mutual love and respect. Non-Muslim households miss these benefits with everyone in the family looking for their own personal enjoyment.