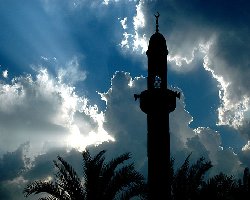 Joseph Cohen moved from the United States to Israel as a devout Jew in 1998, but within three years he had converted to Islam and become Yosef Mohammed Khatib, a supporter of the militant Hamas, according to a report broadcast Thursday on Israel TV.

Now he refuses to say the word Israel, choosing instead to call the area "Palestine." His four children study the Quran, the Muslim holy book, instead of the Torah, its Jewish counterpart.

It was while living in the desert town of Netivot that Khatib met a sheik from the United Arab Emirates through an Internet chat about Israel. Khatib said he spent hours corresponding with the sheik, discussing theology. Gradually he began to see Judaism as racist and turned toward Islam after reading the Quran, he told Channel 10 TV. The report did not say where he lived in the United States or give his age.

Last year he told his wife, Luna, also a devout Jew from the United States, that he wanted to convert to Islam.

"I said, `Listen, I love you very much ... and I have to be honest with you,'" Khatib said in the TV interview. "I read the Quran and I agree with everything it says in the Quran, and if I continue saying that I'm a religious Jew, I would be a liar."

The family converted together and moved from Netivot to an Arab neighborhood in east Jerusalem. The children went from being top in their classes on Judaism studies to being well-versed in Islam, he said.

Instead of supporting the Israeli Orthodox Jewish political party Shas, Khatib now supports the radical Islamic Hamas and believes an Islamic state should be set up where Israel and the Palestinian areas are now located.

He praised Hamas for setting up social services for Palestinians but dodged questions about the other side of the Islamic group - suicide bombings and other attacks against Israelis. The United States has declared Hamas a terror group.

Khatib differed from most Israelis and Americans in his views about Osama bin Laden, the top suspect in the Sept. 11 terror attacks in New York and Washington.

Wearing the white skullcap and robes of a religious Muslim, Khatib denied his Jewish past, insisting that he is 100 percent Muslim. He made a parody of a blessing that observant Jews say every morning, in which they thank God for not making them gentiles.

"Blessed are Thou, Lord Our God," Khatib began in the traditional Jewish blessing, but ended it with, "for not making me a Jew."